Alternative title: Saiyan Clones – The title of this story may change.

There will be more chapters added to this story. Enjoy the first chapter to be published! Make sure to share the love =) with a simple comment or social share! 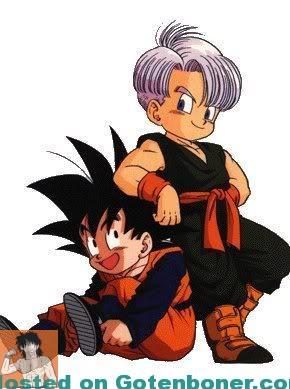 Dr. Collie, the scientist who had worked for Lord Jaguar had lost virtually everything, his bio lab was destroyed by a disastrous bio-cloning experiment that was Bio-Broly. The remains of the lab were cover in goo-blobs, seaweeds and sea water, rendering it totally unusable.

To make matters worse, all his workers quit their jobs and left the bio-warrior project. Dr. Collie himself, gave it up as well and pursued a new project to work on with a new team of scientists and made a vow never to work for Lord Jaguar again.

Now there was a young man who took an interest in the two boys that rescued them from the destructive, ever-increasing blob, and he happens to be a boy-lover.  With Dr. Collie and the lab both gone. this man started his own bio-boy project. Since he was involved in creating the pods and equipments needed to clone people from a single DNA, he was able to recreate the lab but made it small enough to fit in the basement of his own home.

Interestingly enough, he has obtained a single hair from both boys that he found on his own lab coat. DNA-scanning confirms they were the hairs of the boys he seeks. Now all he needed to do was to start the cloning process and make some adjustments.

He recalled how the original boys were supernaturally strong and powerful as he stared into the computer monitor and typed away on his keyboard, deleting everything he didn’t want the new clones of Goten and Trunks to have, such as their superhuman strength and powers, nude-modesty, memories of friends and family, etc. Basically making these clones manageable.

When everything was in place and just the way he wanted it, he pressed “Start” and the two cloning pods started to fill itself with the same substance the bio-warriors were made from. He watched as the bio-warriors arose from the containers. Gazing onto the nude bodies that stood before him, he began to plan what to do after the process is complete. He had to clear his mind. So he left the lab and went to run some errands.

While in town, buying a few food items, it occurs to him of how much nicer it would be to have another set of clones, older and in their mid-teens. He had a dazed look in his eyes as he paid for his food items at the check-out, causing the girl who was checking him out to stare at him in a ‘okay, if you try anything, I’ll pepper-spray you!’ sort of way.

She rolled her eyes. “Great, now just pay please. You’re creeping me out”

He laid the money in her hand, grabbed the bags of food, and walked out. He left the store, ran by the hot clothing store to pick up his latest idea. He ran inside, grabbed some different outfits, then ran back to the vehicle. Then he left with his stuff, heading to the lab.

The two naked little boys were asleep in their pod, floating weird inside. Since they looked ready, the man drained the pods and opened them with the controls.

The black, spiky-haired boy woke up first. Looking around and then he spotted his maker. He jumped down from his pod and ran toward him, grabbing him around the waist and yelling: “DADDY!”

The yell was so loud and intense, that the lavender haired clone was awoken from his slumber and noticed the boy with the man. Instantly he stepped out at Super Saiyan speed, and pushed the boy aside, putting himself at the waist of his maker.

The man grinned as he patted the lavender-haired boy on top of his head gently. So far, all was perfect and as he intended. He had programed them to see him as a parental figure, but the jealousy that this boy was displaying toward the black-haired boy was a little unexpected.

“Now, now.” he chuckles, “No need to shove your brother, there is plenty of me to go around.”  but little did he know that the very sentence he just released from his lips would set off sexual intensity all over the room. The boys gave each other glares from across the room. The black haired boy, getting up off the ground, began to make his way to the man again. Half way there he broke out in tears, crying and moaning.

“OWWW! I’m hurt, Daddy!” He cried with a stream of crocodile tears.

The man made his way over to the boy, picked him up and set him on a nearby table. He then reached between the boy’s legs and begin to fondle his little penis.

The more pleasure builds up in his little penis, the less pain he felt. He giggled.

“Daddy’s playing with my pee-pee!” he gasped with joy. “It feels so good!”

“Now then, what should your names be?” ‘Daddy’ asked as he lifted the boy up and set him beside the lavender-haired boy. The lavender-boy glared in jealousy at his friend’s little boner and slapped it, causing it to spring up and down like a board.

But instead of crying out in pain, the black-haired boy moaned in pleasure. He couldn’t help but shut his eyes and focus on what he just felt.

“I’m Trunks,” the lavender-haired boy stated. “And this boner-boy here is Goten.” he said, flipping Goten’s boner again, this time with a playful grin, causing Goten to looked dazed and dreamy as he moaned pleasurably.

“Alright then! Goten and Trunks it is.” The man said. “You can just call me Dad” he said while placing his hands in his lab coat pockets. “I’m glad we find out what your names are, because I have a surprise for you kids!” He told the nude boys in front of him.

Trunks was listening to every word Daddy said while gripping Goten’s boner playfully, he doesn’t seem to want to let go of it, as he squeezed it and moved it around like a joystick. Goten was just standing there, daydreaming as the waves of pleasure ran up and down his spine. He heard a little of what Dad was saying, but for the most part he was enjoying himself.

Trunks released his grip on Goten’s boner and slapped Goten’s butt, causing him to yelp loudly.

“Stop daydreaming, Goten!” he said. “Dad is trying to tell us about making a couple of big brothers for us! So get the gum out of your ears and listen!”

Goten gave Trunks a glare then turned his attention to Dad.

“Is it true, Daddy?!” The boy asked with a sparkle in his eye.

“That’s right Goten. I will be making big brothers for you too to enjoy living with. They will be like you but older and bigger of course. They will be your sparring partners too. You are to train with them and become stronger.” Dad explained. He walked over to the control board and refilled the pods, beginning the process again.

The two boys where dancing around, cheering and chanting about how happy they were to be getting older brothers. But then they remembered they were mad at each other and stopped, crossed their arms, and pouted.

Both boys felt the stinging impact on their butts as Dad spanked them both at once.

“None of that!” he said sternly. “I will have no glares or pouty-faces in my house, you two will get along or suffer the punishment!”

“Yes, Dad/Daddy.” Goten and Trunks said together, looking a little sad as they rubbed their butts.

The proper way for Trunks to respond would be a normal I forgive you, but that’s not how Trunks’ likes it. His way of saying ‘I forgive you’ is by teasing you. So Trunks responded to Goten by grabbing Goten’s boner, squeezing it with slightly more grip, with a “I forgive you lil bro.”

Goten’s daydreaming just went to a whole new level of intensity! He wasn’t even in the real world anymore. The pleasure had taken control of his thoughts and carried him off to dreamland.

That is, until he heard the siren of the pods going off several minutes later.