The winner of the poll is (Gohan x Goten)

This story will contain Yaoi/Shotacon

Squeal to “Goten Plays with Gohan”

Goten woke up from his slumber with his brother on top of his body. Both naked and touching each other. He flickered his eyes as he saw his brother’s chest above his face. “Wait! His chest?!” Goten thought to himself. Gohan was now the size of a 17 year old Teen, back to himself again. Goten pushed his brother to the side to get him off of his chest. He eyed his bigger brother, but couldn’t keep his eyes from focusing on his manhood. It was bigger than any penis he has even seen! Sure he has seen his own, and Trunks’, but this was huge in the eyes of little Goten. He couldn’t keep holding back much longer, he just had to reach out and grab a hold of this big cock! It was then that he noticed a brush of hair on Gohan’s pubic area.

“Oh, you’re so hairy down here, Gohan.” he giggled, stroking some of the pubic hairs.

Gohan moaned a little from the brush of Goten’s hand on his groin area.

‘It would seem Gohan is a deep sleeper but can still enjoy physical stimulants.’ Goten thought. He continue to rub the hairs on his brother’s groin, and Gohan continued to moan in pleasure. In fact, Gohan moved his hand on his abdomen and began to rub them too. “This is getting exciting!” Goten said while moving his hand lower to make room for his brother’s hand.

Goten then laid himself on top of Gohan, pressing his little penis against Gohan’s big one.

“Aw… mine is not even half the size of his…”  Goten pouted. He gasped as he felt hands clamped both his buttocks and pressed him firmly to his brother’s body.

Gohan, who is still dreaming, grasp ahold of his little brother and rubs their bodies together. “Oooo, Yes! That feel nice!” Gohan moan aloud. His penis began to become erect, sliding up Goten’s abdomen to the center of his chest. Gohan just laid there in amazement at the size of cock he was feeling pressed again his body!

“Gohan’s pee-pee has to be 10 inches!” Goten thought, even though he was exaggerating a bit. It was really around 7.9 inches. But to little Goten, it felt enormous!

Gohan was feeling too much pleasure for him to hold in! 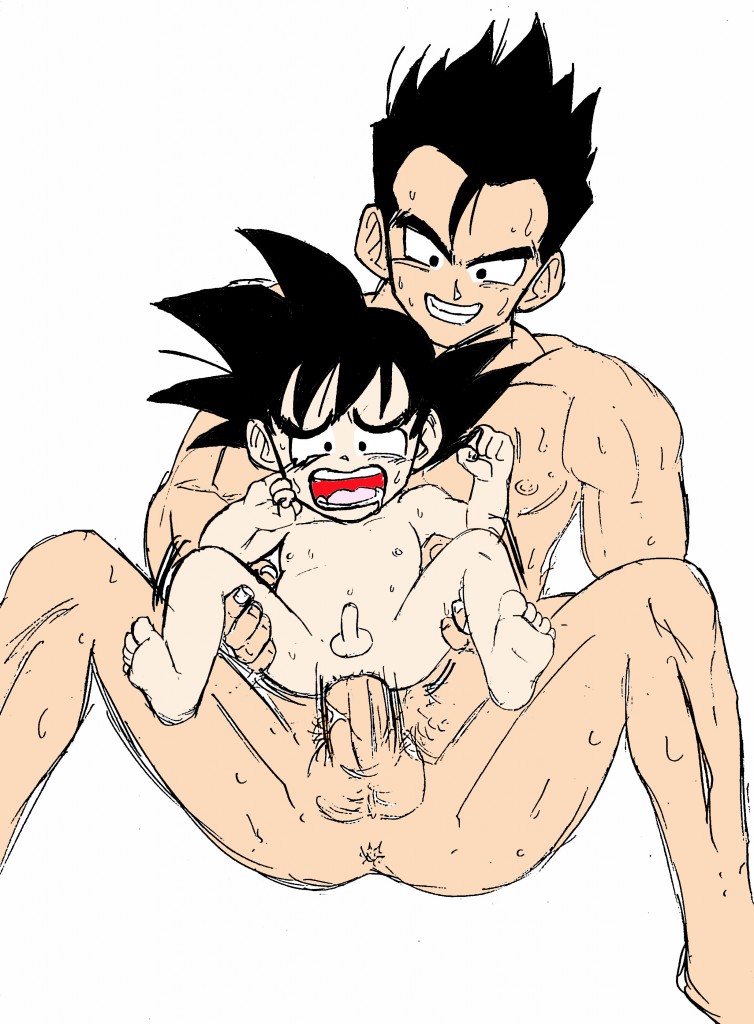 “Ahhh—ahhh—ahhh” Gohan panted. He slid his finger down from Goten’s butt and slid it into his own hole to play with himself. Goten wanted to help out and decided to slide his penis into Gohan instead. He got up and moved Gohan’s hand out of the way as he slides his own penis into Gohan’s body. Gohan instantly flinches on the inside. As he moans, Goten’s penis makes his way into Gohan’s butt. Goten’s penis was so small in Gohan’s anus, that it slid in very easily, and although he was all the way in, his penis could just barely reach Gohan’s prostate, the tip of the head tickled it just enough for Gohan to notice..
“Wow! Gohan’s insides sure are warm.” Goten spoke to himself. He began to fuck his older brother. In and out, repeating and enjoying every moment. He was enjoying, but not as much as Gohan was. Gohan was panting and moaning like a girl who was being fucked by three guys. It was as if Gohan was orgasming multiple times. And that was exactly what was happening. One of the side-effects of the drug was Gohan being able to achieve multiple orgasms.

Goten then felt a pair of feet holding his butt, he looked and saw that Gohan spread and folded his legs so that the feet held his butt as close as possible.

“Ahhh! Ahhhh!” Gohan moaned. He was rubbing his nipples and going back and forth with his feet on Goten’s body. His balls would dance and collide with Goten’s groin, sending even more waves of pleasure throughout both of their bodies.

“G-Gohan…. that felt…. you’re the best brother…” and then, Goten fainted.

“Uh,  what just happened? And why am I naked with Goten? Either way, I don’t want to wake him up.” Gohan questioned. He just looked at his cute sleeping brother and kissed him on the head.

[Featured Story] Catching Up – from B&R

Just One Night With Him